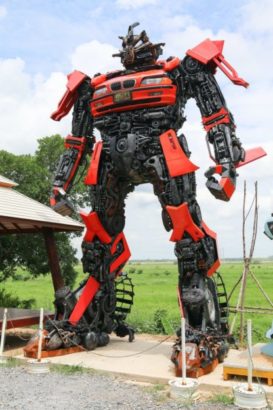 Today technology is helping us to cope with many dangerous events be it tsunamis, be it cyclone or deadly viruses. What we humans are not able to do we make something that can do that, who has more ability to do that particular work than us. But the most important invention that humans are creating is robots who have huge powers to do many different things and even we already developed many high tech advanced robots. Here I am mentioning the top 10 robots that can change your imagination about the future.

According to its name, they also look like butterflies and the weight of these robots is just 32 grams. There are 2 wings, 2 small batteries, and one laser mate casing to complete this small robot.

After charging them for 15 minutes they can fly for about 4 – 5 minutes. If you see it with your eyes it will be very difficult to find the difference between real and robotic butterflies.

With time scientists will make this butterfly more awesome and then even they can be used for many different missions.

This small kangaroo can make a jump 80 cm high and 40 cm long. The controller of this robot gets a special hand band for the controlling of this robot.

In the future, it can help humans to understand how to make the jumps of robots more awesome like very high and long.

This robot was developed with the help of 3D printers and it has a servo chipset which helps the robot for its flexible movements. Spider robot almost looks like a spider and it is very difficult to find the differences between the two.

This robot can be used for many different purposes like because of its small size it can be used as a secret agent to trace the criminal’s activity.

There are many underwater robots that are used to repair the big underwater machines but due to their big size sometimes it is quite difficult for them to go to some small places and fix them.

It is also used to explore the deep see where it is very difficult for humans to reach those places.

It is developed by Norvagan research center and it can do almost all type of mechanical works.

We are humans and we are unable to grow many parts of our body once they get damaged or cut from our body.

So to tackle this problem our scientists have developed some robotic parts of our body which can work similarly to that particular part.

So scientists have developed a robotic arm which you can use if somehow your arm gets damaged.

They have also provided many different ways to control the robotic arm according to user preference.

It has great gripping power which is the most important work of our arms. In the near future seeing people with robotics arms and legs will not be surprising anymore.

Also, there are many theories that in the future cyborgs will be ruling the world as they will have the power of machines and the brains of humans.

Spot animal robot is a robot with four legs and has been developed by Boston Dynamic and it can be used to do many different tasks.

It can sense the obstacles and also be able to avoid them so that you can take them to any surface and they can make them comfortable according to them.

They are also able to climb the stairs and also can open the doors for you whenever you come from anywhere.

And one more important thing is they can also you the drink for me this is a great feature of this robot.

Peeper was developed by Aldebaran Robotics in the year 2014 and you can call her a Happy Robot because she was developed to keep the humans happy.

As you know with time more and more people are at a high risk of depression because of high-stress life.

And there this robot is a great help as it has a great feature of reading the facial expression of humans.

Today many people say that this robot is outdated today but the developer company claims that this is still a very advanced robot.

The chipsets which are used in this robot are very high tech and also they claim that this robot is still a very helpful robot for humans.

Have you watched the Hollywood movie Star Wars if yes then you must have remembered Robo-BB8.

And here I am talking about rolling robots which is exactly like Robo-BB8 this is a kind of robot that you can easily use in your home for different tasks.

Made by tech giant LG this robot can take care of your house when you are out of the station or you are in the office.

You can get the total view of your house when you are not in your home which makes this robot very beneficial.

Asimo is considered the world’s most powerful humanoid robot, and this is also the first humanoid robot that you can use to complete your task with your commands.

You must have seen humanoid robots in many different movies who can do all the tasks as humans can do and also a few tasks better than humans.

And you can compare this robot with those robots in the movies as it can also do so many different tasks and it keeps or learns new things day by day.

This robot is developed by honda and she is 4 feet tall and 54 Kg heavy and can also talk in three different languages which are Japanese, Chinese, and English.

The Japanese government is working very hard on this robot to make this robot very intelligent and powerful.

And you don’t believe that this awesome robot can even dance, hopefully, we will get to see a human-like robot very soon.

She is considered the best robot in the world as she is an interactive robot which means she can even talk to you like a human.

She can answer all your questions and most importantly she even has 62 different types of facial expressions that you can see on her face while talking to her.

Sophia was developed by Hansen Robotics of Hong Kong and also she is very famous even though she has given her interview on many famous news channels.

And with the help of Artificial Intelligence she talked like humans and also her answers are very interesting and she also cracks jokes sometimes.

So these are some very interesting and intelligent robots who can do many tasks which are quite impossible for humans.

And in the coming future who knows that our most of the tasks were done by robots as they have more power than us.

So be ready for an awesome future and if you like this article do share with your friends and family and also if you have any question feel free to ask in the comment section.